Getting Inspiration from Admiration

“This is brilliant! How on earth did they come up with this?”

I’ve lost track of how many time I’ve said something similar to this over the past few years. As it turns out, I’m an extremely jealous person when it comes to design for the internet. I’m jealous in the admiration sense. I follow people whose work inspires higher quality in my own.

Where do you find inspiration for your own projects?  How do you turn a sense of admiration for the work of others into something uniquely yours?

The Role of Role Models

Have a hero or two. The people I’ve come to respect and learn the most from learn transparently. They are the few who aren’t afraid to say “I started one way, but it wasn’t the best way”. Their style makes dramatic changes. Some might call them hypocrites, but is that really the case? Does learning to have better opinions and practice make your previous work a shame? I vote no. A portfolio that shows no improvement over time is stagnant.

The people behind big sites often have lesser known work. People like Ryan Sims and his justwatchthesky tumblr: a side-project which focuses on using two fonts to present song lyrics. It sounds simple, but the results are an inspiration to typography enthusiasts. 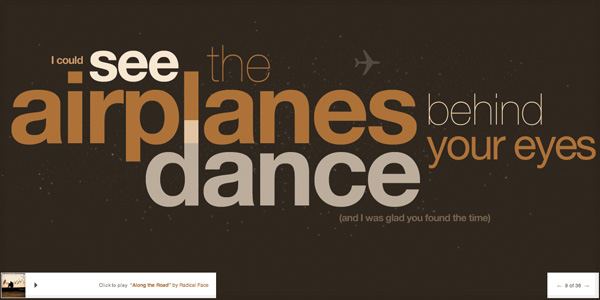 “The scope is narrow: An exercise in documenting words in the music I listen to with color and type. The constraints are simple: (1) Only use Georgia (serif) or Helvetica (sans) and (2) try to post as often as possible.”

How many of the 6 billion people in this world can do this?

As the internet brings communities and professionals closer, we lose sight of some key points. The world is a big place. We interact with brilliant designers and developers on a daily basis, but these people are still not common in our surrounding area. It’s still possible (and impressive) to be one of the best web designers in Northern Ireland. The business is global, but not everyone in the world sees it as clearly.

If that doesn’t work, talk a walk until you see Comic Sans on display. It will be a brief walk. Promise.

Learning from the Best

Thanks to online showcases, there’s no shortage of great design inspiration. You can see how the other half designs, and learn some new skills in the process. 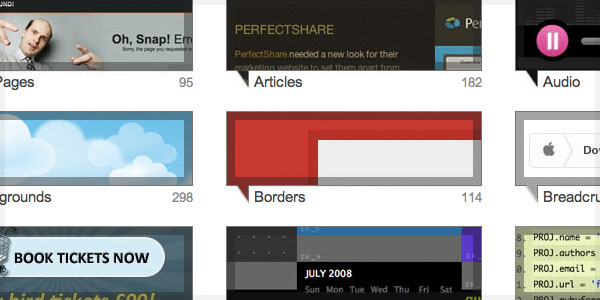 The abundance of high quality work is also one of the downsides to inspiration galleries like CSS Remix and Pattern Tap. When browsing the best it’s hard to remember that excellence is not typically the standard. These galleries sift through thousands of submissions to showcase the best. It’s the point!

The situation is much like judging your own intelligence after being in a room filled with geniuses. There’s plenty to learn, but you’ll have a terrible time trying to feel smart afterwards. Don’t judge your own merits based on the work of those better than you – use them to set your goals.

I’m still surprised to find web designers who have never heard of Smashing Magazine or AIGA. These are part of my everyday life, as well as all bloggers and designers who show up in my feeds every morning. This disconnect from the majority of the population creates a unique kind of groupthink about excellence.

The bloggers and designers that make up my feeds are aware of the latest design trends, industry legends, and standards, but there are plenty of folks who have never heard of them. We’ve built a new set of standards. Simply by reading this and other blogs, you’re in a great position to learn new skills. Don’t undervalue the resources you already use.

Chances are that you’ve heard Pablo Picasso’s famous quote at some point before:

I’ve encountered designs which absolutely blew me away. I was motivated enough to make a new draft of whatever design I was currently working on. The first result would look strikingly similar to the inspiration, and would somehow look terrible.

After personalizing and building off of principles found in the first, I would eventually reach an entirely new piece. This design would look like an extremely distant cousin to the inspiring one, but tended to look better. The difference was that this design had grown into its skin. This is why those who copy sites verbatim fail. The finished product was never intended for this new purpose – it just seems hollow.

As Picasso says, the act of stealing is actually very different than copying. To steal in the design world is to create something new out of inspiration.

A Blogazine Example in Inspiration

Consider the Jason Santa Maria inspiration to Dustin Curtis. Both have been featured in articles for their “blogazine” style approach to posting. I suspect Dustin took inspiration from Jason’s style. The result is not one, but two brilliant examples in blogazine design. 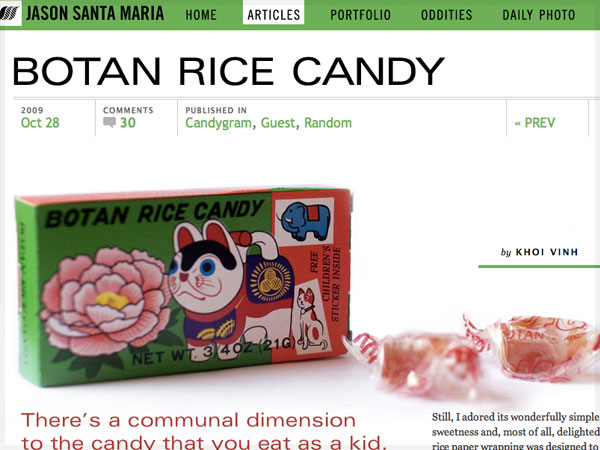 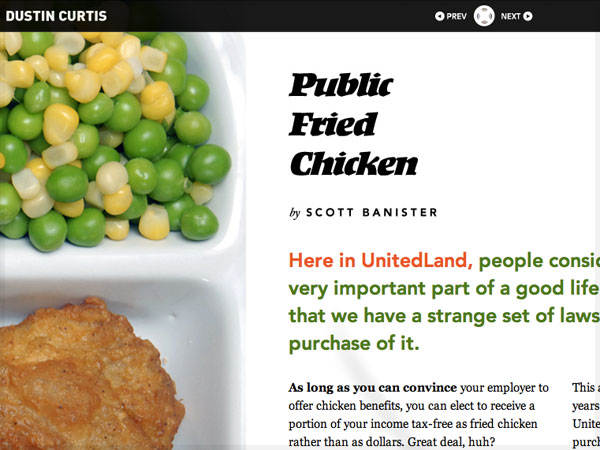 If Dustin took inspiration initially, he was able to transform it into something original under his own talent. That’s what inspiration from admiration comes down to: Creating off the ideas of others. Stealing instead of copying.

Apparently Pablo was onto something.

Interested in reading more on inspiration in design? Below are a few articles that inspired the post you’re reading now. They’re sure to give more food for thought.