How web firms that focus on shipping instead of perfection do better, and how you can do the same.

Just to be clear, this isn’t a call for mediocre work. I’m sure that we can all think of “234 Reasons Why Rushed Design is Bad”, and this article is certainly not an excuse for it. Instead, this is an invitation to start your projects with a focus on completion rather than un-actionable wish.

What do I mean by un-actionable? Suppose you were asked to do one of the following:

Some of you may be leaning towards the second option while thinking to yourselves “That’s an easy choice, of course I want to create brilliant designs. Not so fast. While it’s admirable to set a goal of “pixel perfect” design for each project, it should almost never be the guiding principle. At least, not without some other goals to provide substance.

Consider the two goals given above. In the first, we’ve given ourselves a concrete goal by which to act. A website must be completed by a given date. There is a specific end in sight. In the second instance, we’ve started with some much more subjective. At what point does a design become high quality? Based on this, when are you actually done?

If the work of agencies and web startups are any indicator, projects are judged on more than a pixel by pixel critique. A design can be “good enough” but still wildly effective for a campaign. Especially timelines are consistently met. Successful projects are measured in a number of ways beyond pure design, and many of them carry more weight than the end aesthetic.

Yelp’s website, for example, is successful despite having a layout that lacks the polish that the web design community might prefer to see. It’s usable, but in a way that you might say “I could polish this up”. 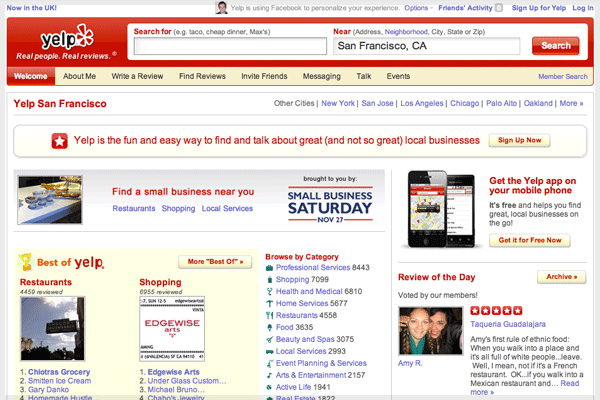 Video: Daniel Burka (Designer at Digg) gives a great presentation on this idea of “Just getting it out there” in his talk at Webstock 2010. It’s a long video, but well worth the watch.

When I tweeted about this a while back, one of our followers pointed me to a quote by Voltaire. “The perfect is the enemy of the good.” It simply means that people focus too much on reaching a perfect solution, and it prevents them from making solutions that work well enough. If you focus on pixel perfect before shipping, you won’t get very much done at all.

A modern day version of this idea was presented in a quote from Reid Hoffman of LinkedIn:

“If you’re not embarrassed when you ship your product, you waited too long” – Reid Hoffman

Being known as the firm/freelancer that delivers can be much more profitable (socially and financially) than being known for a specific kind of perfection. Especially when good design is often in the eye of the beholder. Deadlines aren’t. Some of the best reviews that our team at One Mighty Roar have received have nothing to do with the product, and almost everything to do with our execution.

I’m a huge fan/advocate of Dan Cederholm’s Dribbble community, but there’s a problem that comes up when you spend too much time on it. It’s an unavoidable issue, and chances are that you’ve fallen into the trap before too. When you look at tiny snippets of things that look incredible, it’s easy to feel like you need to restart and scrap whatever is already done. For your own sake, please don’t. 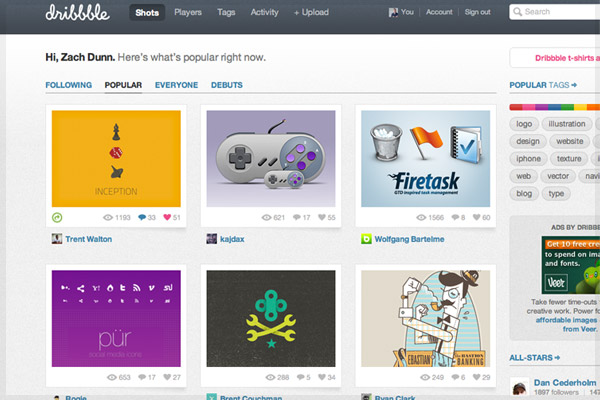 Dribbble is a community built on designers who consistently produce “That’s Awesome” responses to 400 x 300 pixel shots. This is a great way to pick up on trends and tiny design details, but it can be paralyzing when used as a constant reference. The mistake of comparing your own work to that of such a mix of shots is that it’s not an even playing field. Your design may not be (in your mind) as inspirational, but the important thing is that you’re working on it.

To use a fairly well known example, let’s take a look at the current work of Jason Santa Maria. He’s consistently cited as one of the leading figures in design, and speaks about it across the country. Now let’s take a look at his first website from around 2000. Almost immediately, you notice that it’s not amazing. His second site design from 2004 shows progress, but still isn’t mind-blowing. The third version follows a similar trend. 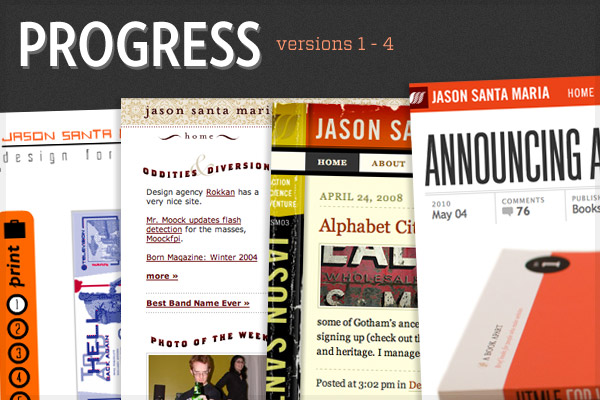 Does this cheapen Jason’s design ability? It shouldn’t. What it should do is help illustrate a obvious (but often overlooked) point: it takes time and experience to get good. People seem to forget this in an effort to become the next legendary designer who builds incredible work by age 23. You have to complete projects in order to grow.

Developing web designers often feel the need to compare their work to the folks who have been at it for years. Stop comparing yourself to the best out there. Learn from them instead.

I convinced myself a while ago that the designers I looked up to were bonafide prodigies. That they had somehow managed to always have a high level of talent that set them apart from everyone else. But that’s not the whole story. In reality, many of these designers started with the same frustrating designs that left them feeling like more could be done. The difference is they spent more time on it.

Ryan Sims (of Virb and The Big Noob fame) has an eloquent argument to just this point on how “Practice Makes Pixel Perfect” from the 2009 Build Conference. It’s another video that won’t waste your time.

You should take comfort in the fact that by actively participating in the design community, you’ll be a better designer by this time next year. Now put out your next milestone and prove it.