We were promised refrigerators

What happened to the “Hello World” for the Internet of Things?

It’s late evening and the mood is tense in suburbia. A family’s milk reserves has just run dry, with no backup plan to replace it before tomorrow’s breakfast. This wasn’t supposed to happen. But then… something unexpected. A new carton arrives during the night as if by magic. Crisis averted.

It was a noble dream for any 1960’s family. Except this particular pitch came almost 40 years later in 1999’s “Battle for the Fridge” —

… By 6 a.m., a new gallon will be on your doorstep, thanks to a microchip sensor embedded in the milk carton and transmitted to an Internet device on your kitchen counter.

It’s the latest battle in cyberspace. And it’s coming soon to your refrigerator.

…and to believe we’re still hand-checking expiration dates like animals.

It’s been nearly 15 years since this article was published, and all we have to show for it is marginally better ice cube management. Owning a smart fridge still seems like the future despite CES launches every year which bring us “closer” to the goal of shopping list autonomy.

Which might explain why we still see “forward movement” on a product that feels like it should be as ubiquitous as smartphones by now. 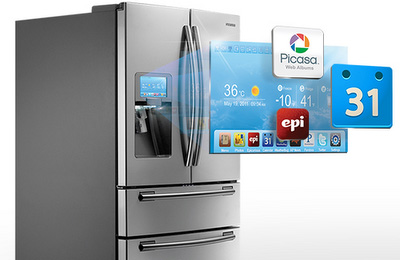 It’s been a good run for the digital shopping list

I sincerely doubt that a refrigerator will champion the physical and digital crossover. Milk isn’t a sexy problem to solve. Arduino and Kickstarter have shown what happens when you give tools to makers — they tend to focus on bigger things than expiration dates.

Somewhere along the way, the smart fridge became an easy way to explain how the internet can work with physical stuff. The idea of a self-aware refrigerator became so popular that people continued to talk about it instead of buying one. Internet-connected fridges became a thing people saw in annual “Imagine a future where…” news features. A testament to how far the world had come. A fanfare of human progress. One small problem — virtually nobody actually owns one.

Still, there’s no shortage for Internet of Things (IOT) focus on personal spaces, especially in home automation. And why shouldn’t there be? Building for the home makes tech personally relevant, and is an introduction tool that’s been used for a century’s worth of consumer products.

When we first started developing Robin at One Mighty Roar, introduction was something our team thought a lot about. Personal spaces generally have a narrower set of problems than public, and we believe the most compelling IOT concepts come from group dynamics — something the home misses out on most of the time.

The challenge of IOT is that most people don’t know how to ask for the things they would actually use — so we have to show them instead. In places they expect things to change, and don’t have a personal attachment to successful experimentation with.

We think the best way to introduce the Internet of Things is to focus on public spaces instead of personal. Spaces that don’t require a family to bring tech into their home for an introduction. If they like the experience, they can seek it out for themselves. As IOT expands to be more than motion sensor light controls, experimenting with “showcase tech” in public spaces will have a larger role in the decision to invite that tech back home. This is what the teams of people perfecting kitchen touch screens have forgotten. The challenge with “smart things” is they often need to be personally experienced in order to be fully appreciated.

Or maybe this is the year we finally impress the neighbors by sending email from our refrigerator.